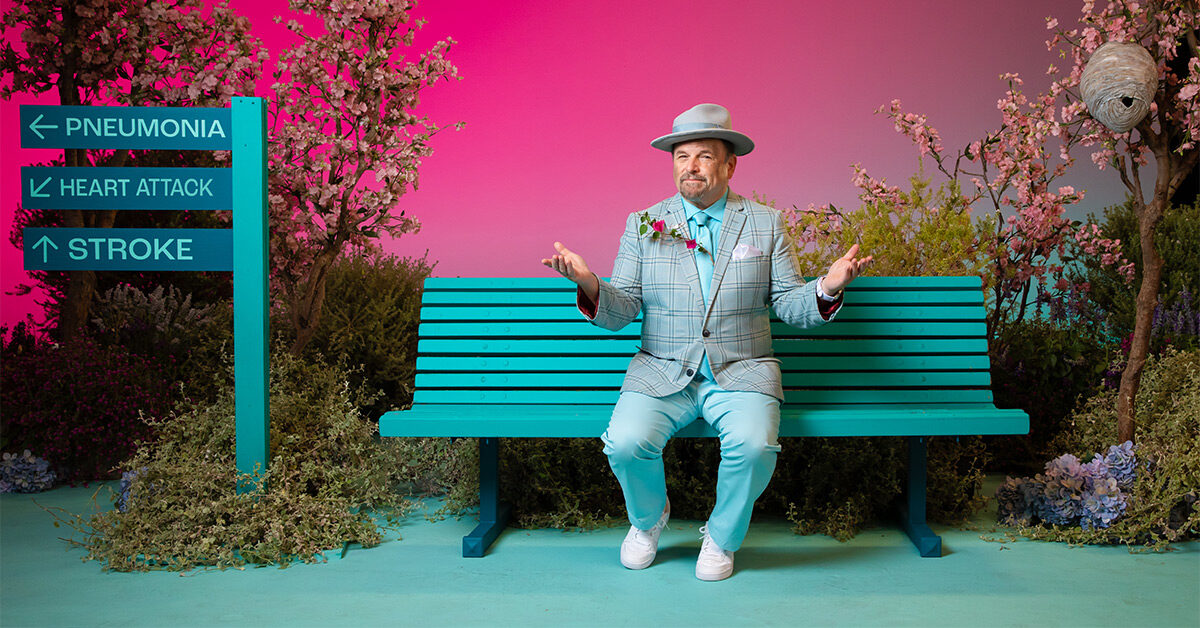 Actor Jason Alexander is best known for his iconic role as George Costanza in the hit television show Seinfeld. But growing up, he considered a different career path besides acting.

“[My] mom was interested in me having a medical career because that’s a life that she found and she valued a life that was in service to other people. All her life she was a nurse and spent many years as a nurse educator,” Alexander told Healthline.

During her career, his mom established and ran a school of nursing in Livingston, New Jersey. She also worked alongside medical researcher Jonas Salk, who developed the first successful polio vaccine.

“[So] there was no nonsense about vaccinations in my house when I was growing up. My mom was an advocate and believer in these breakthroughs,” said Alexander.

While performing and acting turned out to be his true calling, his mom would be proud of his latest endeavor.

Alexander teamed up with the American Nurses Association (ANA) and Sanofi for their Not Today, Flucampaign, which empowers people to get the flu shot to help lower their risk of flu and its , including flu-related hospitalizations, pneumonia, and worsening of chronic conditions, such as congestive heart failure, asthma, and diabetes.

“I was delighted to be asked to be part of it,” he said. “It’s one of the very rare good uses of celebrity — to stand next to things that are actually important.”

As part of the campaign, Alexander is featured in a lighthearted and funny video.

“Comedy is very healing. Comedy is very bonding…when you can get it right…[and] if it makes somebody laugh, laughter is still (they’re not kidding) it’s really good medicine,” he said.

His passion for comedy draws him closer to his mom’s passion for helping others. Over the years, he realized that while acting, directing, and telling stories were not the same kind of service work his mom provided, they allowed him an avenue to help others.

“[Doing] these kinds of public service work, talking about things that have value, that may or may not get enough attention in of themselves, and being a face for it or being a voice for it, that is exactly the kind of stuff my mother would have said, ‘good for you, little Jason. That’s exactly the way to do this,’” he said.

The fact that in this case, the Not Today, Flu campaign is about something that his mom would have been passionate about makes it all the more meaningful to him.

Although the Centers for Disease Control and Prevention (CDC) recommends annual flu vaccination for everyone 6 months and older (with ), it reports that

Ernest Grant, PhD, RN, president of the ANA, pointed out that certain groups are at increased risk of flu-related complications, including:

“There is also a high probability that this flu season may be particularly severe due to the reduced exposure of the population to the flu virus during the past two flu seasons,” Grant told Healthline. “Communicable diseases and viral variants are always emerging and are unpredictable. You may not be able to prevent from catching other viruses and suffering potential devastating complications, but the flu shouldn’t be one of them.”

For the past 20 years, Alexander has gotten the flu shot regularly. But he recalled two key instances early in his career when the flu derailed his performances. As a person with asthma, he said illnesses that affect his bronchial tubes are “a big deal and almost every time as an adult that I’ve had flu, it’s turned into bronchitis.”

Most memorable was when he was performing in the Jerome Robbin’s Broadway musical, for which he won a Tony Award for in 1989.

“[But I] almost didn’t [win] because I got the flu during Tony voting season and I missed over a week of shows…and I came back and was performing the show with bronchitis,” he said. “It turned out fine, but it would have been so much easier if I had just taken the vaccine.”

Years later, while filming a movie during his time on Seinfeld, he got the flu.

“[It] didn’t derail me, but the medications that I had to take to be able to work while having the flu, I felt like a zombie…It’s so unnecessary; you don’t have to get the flu and if you do, you can make it such an inconsequential thing,” said Alexander.

“I’m so lucky to have the health profile that I’ve got, but I also know that they’re fragile and it just takes a bad illness and your whole health profile can change,” he said.

For Alexander, protecting his health with preventive measures like the flu shot is also about protecting the health of his loved ones, such as the elderly and babies in his life.

“If you have the flu and flu is contagious, you can wind up giving it to somebody who is vulnerable and somebody you adore, and you don’t have to do that…You just take it out of the realm of possibility; you’re not going to be that person,” he said.

Aderson explained that the flu vaccine causes the body to develop antibodies against influenza approximately two weeks after getting the shot.

“These antibodies work at neutralizing and fighting the flu,” she said.

While the reports that side effects of the flu vaccine are generally mild and last only a few days, common side effects might include:

If you want more information about the vaccine, Grant suggested consulting with “a trusted voice to help guide you in your decision and explain your options.”

And if you’re ready to schedule a shot, you can find one offered in your area by visiting here.

Alexander said, for the record, George Costanza would have his appointment set.

“George…was a bit of a hypochondriac, so he would want to make sure nothing got him, but the most important thing is in many, many, many instances, the flu shot is free. So, free? That’s George’s big word. I mean come on, he would have taken anything for free,” said Alexander. “He’d certainly go get the vaccine, that’s for sure.”