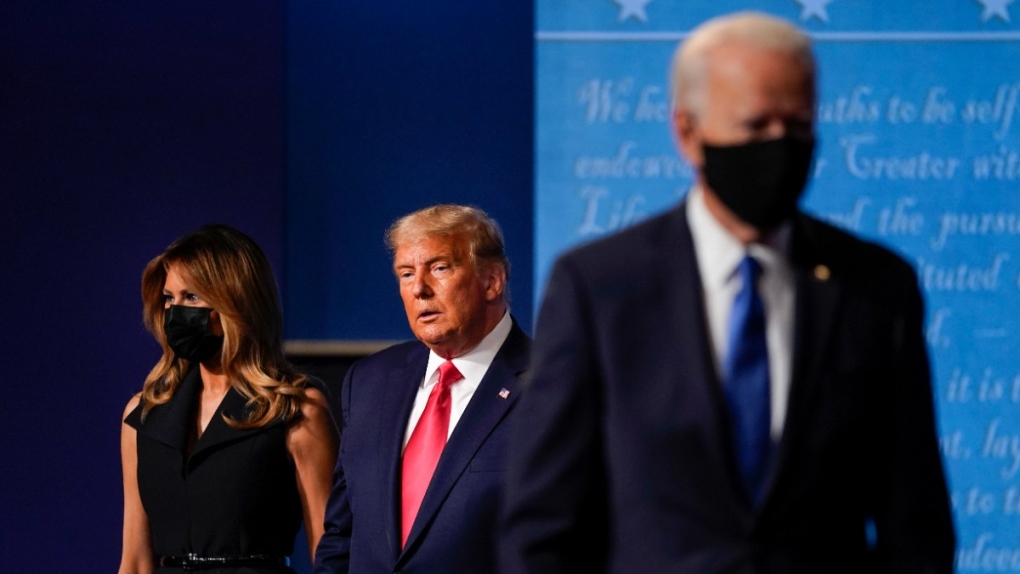 
Former U.S. President Donald Trump’s top general feared he would authorize a strike on Iran as his presidency ended. His intelligence chief wondered what Russia had on him. A billionaire friend convinced him to try buying Greenland. A half-dozen top officials considered resigning en masse.


Even his wife, first lady Melania Trump, was “rattled by the coronavirus and convinced that Trump was screwing up,” according to a forthcoming book from New York Times chief White House correspondent Peter Baker and New Yorker staff writer and CNN global affairs analyst Susan Glasser set to publish on Tuesday.


In a phone call with former New Jersey Gov. Chris Christie, who maintained ties to the White House despite occasional criticism of Trump, Melania Trump sought help convincing her husband to take the pandemic more seriously.


“‘You’re blowing this,” she recalled telling her husband,” the authors write. “‘This is serious. It’s going to be really bad, and you need to take it more seriously than you’re taking it.’ He had just dismissed her. ‘You worry too much,’ she remembered him saying. ‘Forget it.’ “

The razor’s-edge instability clouding Trump’s four-year tenure in the White House led many of his senior-most advisers to worry about the fate of the country. The volatility is laid bare in new detail in “The Divider: Trump in the White House, 2017-2021.” The reporting for the book included two interviews with the former President at his Mar-a-Lago estate in Florida.


Baker and Glasser write that many of the well-known fears about Trump’s presidency were in fact closer to reality than previously reported, leading to widespread attempts among those who worked for him to head off disaster.


The revelations could also foretell the presidency Trump might oversee should he return to the White House in 2025. Trump’s associates have told CNN he could announce a presidential bid after November’s midterm elections. But, as Trump told Baker and Glasser, he won’t invite former Vice President Mike Pence to join his ticket after Pence refused to interfere in the certification of the 2020 election.


“It would be totally inappropriate,” Trump said. “Mike committed political suicide by not taking votes that he knew were wrong.”


The book describes deep concerns among Trump’s national security team, led by Joint Chiefs of Staff Chairman Gen. Mark Milley and others, that the then-President would ignite a conflict with Iran in the waning days of his presidency or that he could stumble into nuclear war with North Korea.


One administration official told Trump before the 2020 election that if he lost, he should strike Iran’s nuclear program, the authors report. “Milley at the time told his staff it was a ‘What the f— are these guys talking about?’ moment,” they write. “Now, it seemed frighteningly possible.”


The tensions with Iran even permeated the walls of Mar-a-Lago. Trump told guests at a cocktail party over the holidays in 2020 that he was leaving early to return to Washington because of fears Iran may be trying to assassinate him to avenge the U.S. killing of the country’s top general a year earlier.


Concerns over Trump’s behaviour on the world stage began nearly as soon as he took office. More than simply a passing grudge, Trump’s desire to withdraw the United States from NATO was in fact a sustained effort that was “much more serious than people realized,” one senior White House official said — an outcome that could have dramatically altered the current war in Ukraine.


Following a 2018 meeting with Russian President Vladimir Putin in Helsinki, Finland — after which Trump sided with Putin over U.S. intelligence agencies who had determined Russia tried to interfere in the 2016 election — the top U.S. intelligence official was left wondering what Trump’s real motives were.


“I never could come to a conclusion. It raised the question in everybody’s mind: What does Putin have on him that causes him to do something that undermines his credibility?” Dan Coats, the then-director of national intelligence, reflected to associates afterward, according to the book.


And a months-long fixation with purchasing Greenland from Denmark went far deeper than previously disclosed, inspired in the early days of Trump’s presidency by a wealthy friend from New York, the cosmetics heir Ron Lauder.


“I said, ‘Why don’t we have that?’ You take a look at a map. I’m a real estate developer, I look at a corner, I say, ‘I’ve got to get that store for the building that I’m building,’ etc. It’s not that different,” Trump told the reporters for their book.


Lauder proposed to Trump’s then-national security adviser John Bolton that he act as a “back channel” to the Danish government. Instead, top National Security Council aides engaged for months in secret talks with Denmark’s ambassador to the United States about Greenland.


Eventually, however, public revelations about Trump’s plans to buy the island prompted indignation in both Greenland and Denmark, scuttling any effort to enhance the U.S. role in an increasingly strategic area. Trump called the Danish leader “nasty” for rejecting his idea and canceled a trip to Copenhagen.


Trump enjoyed friendlier relations with other world leaders, but often imposed his own brand of chaos.


Baker and Glasser report Trump once abruptly phoned Jordan’s King Abdullah II to inform him he was “going to give you the West Bank,” prompting the monarch to tell a friend he thought he was having a heart attack.


“I couldn’t breathe. I was bent doubled over,” he said.


And while Trump liked to frequently tout that then-Japanese Prime Minister Shinzo Abe — who was assassinated in July — had nominated him for a Nobel Peace Prize, Trump had actually explicitly made the request to Abe during dinner in New York.


“The President asked Abe over dinner to nominate him,” a senior Trump national security official says in the book.


Baker and Glasser describe previously unreported plans by members of Trump’s Cabinet to collectively resign amid the chaos, only to remain in their posts out of concern for whohe might select to replace them.


In encrypted text messages, then-Homeland Security Secretary Kirstjen Nielsen told a top aide that five senior officials in the Trump administration — including the secretaries of Defense, Education and Interior — were on the verge of quitting amid a particularly chaotic period ahead of the 2018 midterms.


“Ok for the first time I am actually scared for the country. The insanity has been loosed,” she wrote in the messages.


Trump’s demands on his team included outlandish requests like abolishing the Ninth Circuit Court of Appeals after it blocked one of his immigration policies.


“Let’s just cancel it,” he told Nielsen, according to the book. He told Nielsen if such a move required legislation, “then draft a bill to ‘get rid of the f–king judges’ and have it sent to Congress as soon as possible.”


When it came to responding to the COVID-19 pandemic, however, it was his most trusted advisers who were encouraging him to do more, particularly in the early days when Trump appeared nonchalant about the severity of the crisis.